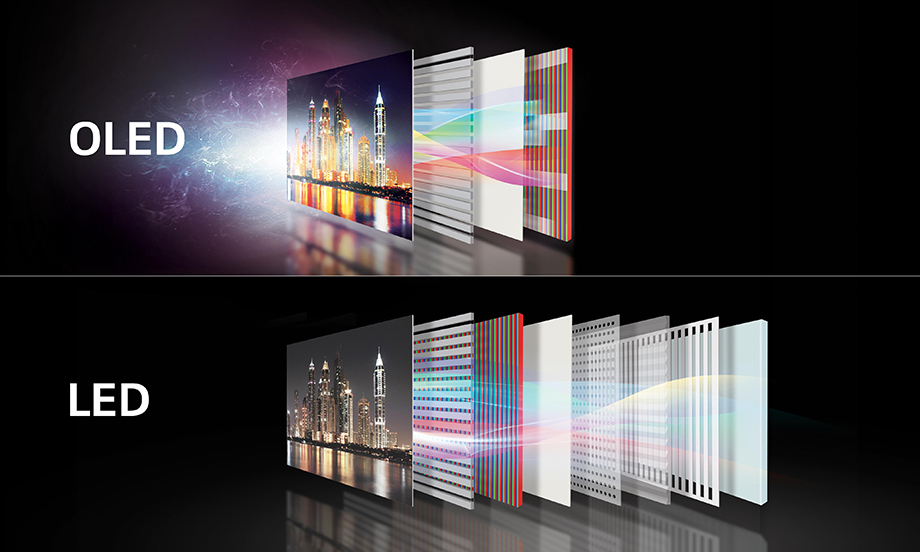 The Rundown – Organic Light Emitting Diode
So Organic Light Emitting Diodes, or OLEDs, are a recent development in panel technology that lets us get away with making screens that do all sorts of futuristic things. Because key components are organic and self-illuminating, we accomplish feats such as make curved screens, super thin displays, and greater color depth, specifically in black and darker color ranges, then ever before.

Okay, so how does that compare to my current TV?
More than likely, your current flat panel TV is a LED, or more accurately, a LED backlit Liquid Crystal Display (LCD). LED TVs boasted a few significant improvements over it’s competition, but when compared to OLED, it has a few shortfalls. The fact that it is fully backlit means that the screen never completely shuts off, in part or in whole, unless you turn the TV itself off. Even when you are looking at a completely black screen, there is still light being emitted, which ends up with blacks that can look washed out. OLEDs can turn off individual pixels, getting you closer to true blacks then any display technology has. That same quality also means that LEDs generally use more power, as darker images on an OLED require less.

So, it’s darker and more power efficient. Anything else?
Of course there is. Otherwise this would make for a very short blog. Shameless self-promotion aside, another difference is in the thickness of the screens. Because they don’t require a separate array to backlight the image, the necessary screen thickness is drastically reduced, with some televisions boasting screen depth measuring in the millimeters. This opens entirely new avenues for placement and applications. This also allows for a greater viewing angle of the screen, meaning that the image doesn’t get faded or washed out as you move farther out to the sides.

Alright, that is pretty neat. Any other points of consideration?
We could go on and on about things like refresh rates, color balance considerations, dual-sided displays…did I lose you there for a moment? Many of the advantages we haven’t discussed are in the very technical range, and merit entire discussions on their own. Suffice to say that the opportunities that OLEDs present will leave us searching for more reasons to utilize them as other technologies progress and availability of OLEDs increases.

Okay, but do I have to get one now?
Even if making the move up to 4k isn’t in the stars for you yet, taking advantage of OLED technologies now will let you see some immediate benefits to your viewing experience. So now, when you are cruising through the Television section, you’ll have a better idea on what to look for. If you want to get a professional opinion, give us a call to see which option works best for you.